The Revolubetion Is Here! King of Shaves Does It Again 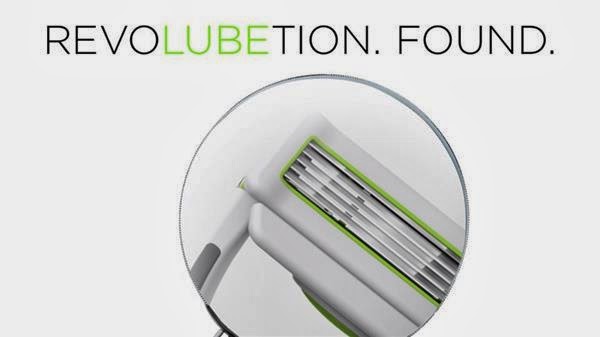 I was in the shower one morning, getting ready to shave with the latest King of Shaves gel, when a sticker on the side caught my attention. The sticker was encouraging customers to email King of Shaves with any questions or comments I may have about their products. I felt inspired. I had been using King of Shaves oils and gels for years and it had revolutionized my daily shaving experience by alleviating the constant razor burn I had dealt with since I began shaving all those years prior.


I reached for my Blackberry and from under the streams of hot water in my shower, I emailed King of Shaves with my praise of their products. To my amazement, I received a response. Not just an automated response. The Queen of Shaves herself, responded to my email personally. In it, she revealed that King of Shaves had recently released a new razor called the Azor. She asked if I had tried it. I had not even hear of it. Of course, it wasn't available in the stores in the US, only in England. The Queen then sent me a package that included the Azor, some blades and some other products such as oils and balms and a very nice hand written note. I had never had a smoother shave than the first one with that Azor.

I connected with the Queen via a new social platform called Twitter and to my surprise, the King, himself tweeted me. This began a fantastic relationship with the founder of King of Shaves and his amazing US Rep, the Queen.

So it has been with great anticipation that I have been waiting patiently "State-side" for King of Shaves new Hyperglide razor. For the first time the King of Shaves razor would be carried in US stores, exclusively through select Target. Amazingly, one of the only 200 Target stores to get the Hyperglide was my Target store in Bismarck, North Dakota. I like to think that the King made a special request of Target just for me. One can dream.

I checked almost daily for the arrival of the Hyperglide at my Target. Finally, one evening I saw the blades, gels and oils on the shelf for the first time. But there were no Hyperglides. So I acquired an assistant and persuaded him to look in the back for a box of Hyperglides. He found them and I purchased my first four Hyperglides, right out of the packing box.

I decided to use this new razor for a couple cartridges before writing a review. And that day has come. I would like to start by highlighting a few things that were revolutionary about the Azor since this new Hyperglide is essentially the next rendition of the Azor.  I find that important because before the Hyperglide, the Azor was already a revolutionary razor that superseded all other wet razors in design, quality, function, price and results. The Hyperglide is an improvement on that life-changing razor.  Of all the reviews I have read on the Hyperglide to date, they have all been remiss to mention the great features that have been retained from the Azor.  If you read those reviews you might come away with the idea that this razor from King of Shaves is just like any other razor except for the new and admittedly segment changing Hyperglide feature. This would be a huge mistake. The Hyperglide is unlike any other razor in the world, not simply due to the Hyperglide feature.

This razor is designed in a very unique way. It is curved in the opposite direction of every other razor. This means it must be held differently and used differently than other razors. But it is a brilliant design. Instead of needing to maneuver the razor through all the angles of your face to get a close shave, this design molds to the curves of your face on its own. As you move it across your cheek and over your jaw, by virtue of how it is shaped and held, it automatically holds to the curves of your face. This ensures a close shave, even in places where you have struggled in the past, regardless of the acrobatic contortions of your wrist, required with other razors.

Another part of the design is a split handle that connects to the cartridge on the ends rather than the center. This opens up the area just below the blades, allowing you to easily see where you are shaving. Combining this feature with the see-through gels and oils from King of Shaves, gives you unprecedented ability to shave more precisely and effectively.

Lastly but by far not leastly (yes, I know that is not a word) is the Bendology Technology. This has been refined over the years and comes in a totally new form in the Hyperglide but its effectiveness is even greater than its first manifestation. Most razors have a pivoting head. That is not Bendology Technology. What is built into the Hyperglide is a technology that doesn't simply allow the cartridge to pivot, but rather, it allows the cartridge to always remain firmly, and solidly, against your face (or legs, ladies) regardless of the angle. It's not about the contortions of your wrist or the angle of your arm, the Bendology Technology does it all for you. Before the advent of the Hyperglide technology itself, this was the single greatest reformation of the modern razor ever.

So what about the newest and greatest innovation in the Hyperglide?  Is it such a paramount change that it does indeed warrant being the very name of the new razor?  In short, yes.

To truly appreciate this new invention in razors, you must understand that King of Shaves began with one product, shaving oil. And even after the release of the Azor, the focus of King of Shaves has remained shaving preparation products such as oils and gels. And they are top notch. There are none better. I have tried them all, I know. So, for a company founded on providing world class quality shaving oils and gels to release a razor that presumably eliminated the need for said oils and gels, it must be something revolutionary, or "RevoLUBEtionary" as the King puts it. And it is.

The Hyperglide has new technology infused into the face of the cartridge called superhydrophilic self-lubrication. It creates a Hypergel layer between your skin and the razor when it comes in contact with water. This, of course, means you can shave with just water , no oils, gels, or foams required. 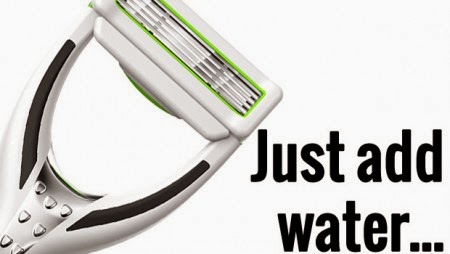 The feeling the first time I placed the Hyperglide against my face with only water between my skin and the blades was unreal. How often do you get to experience something in life that you have never experienced anything like it before? As you get older it is less and less frequent. This was one of those times for me. Just the experience itself was worth the cost of the razor. You owe it to yourself to try it just for the experience. It felt as though if I were not pressing the razor against my wet face, it would literally be repelled from my skin and fly across the room. It wasn't simply the feeling of another gel or oil between my skin and the cartridge, it felt as though the actual cartridge was being repelled from my face. All friction was eliminated completely. It was an unreal feeling.

I then figured if it was this good with only water, how much better would it be with King of Shaves Kinexium Oil? Surprisingly, it wasn't any better. Now, the blades will last longer if it is used with a King of Shaves oil or gel, however, the effect isn't any different.  That is amazing. Or as Will King puts it, Shamazing.

I remember introducing the Azor 5 to a friend and I loved his response the first time he used it. He said he had to actually run his hand across his face to make sure it had actually shaved something because it had moved across his face so smoothly. This was true for me too. The Azor 5 moved across my skin so smoothly and without effort that it seemed hard to believe it had actually just cut off all of my whiskers. But it had. The smoothest shave ever.


When I asked Will King what would be redesigned with the new Hyperglide, his answer was one word, and all inclusive. "Everything".  And while the Hyperglide still is an Azor, even the features that it retained from the Azor 5 are completely redesigned for the Hyperglide. This includes the blades themselves. I found it hard to believe the blades from  the Azor 5 could be improved upon. After using the Hyper glide for several weeks, I think this is still true. This is the one aspect of the Hyperglide that doesn't seem like an improvement on the Azor 5. Some days I do get that unbelievably smooth skin and unreal close shave from  the Hyperglide blades as I consistently did from the Azor 5 blades but it is not as consistent as it was. The blades themselves are not as friction-less as the previous Endurium blades of the Azor 5. I can feel them cutting my whiskers whereas with the Azor 5 I never felt that. I have faith they will get this worked out.

Regardless, the Hyperglide is still the premium razor on the market, providing the newest and best technology available and delivering the best shave out there. If you are not lucky enough to live in a city where Target is carrying the Hyperglide and other King of Shaves products, you can easily purchase them from   Target.com   and they will be quickly shipped to you. I have been using King of Shaves products for years, mostly shipped from the UK directly and have never had an issue so do not be afraid to try them from Target.

You can also order directly from King of Shaves via www.shave.com.

In the end, the Hyperglide is truly innovative, extraordinary, and effective. You will be Shamazed by the Hyperglides RevoLUBEtionary superhydrophilic tech from the company who is out the Shave the World. King of Shaves.